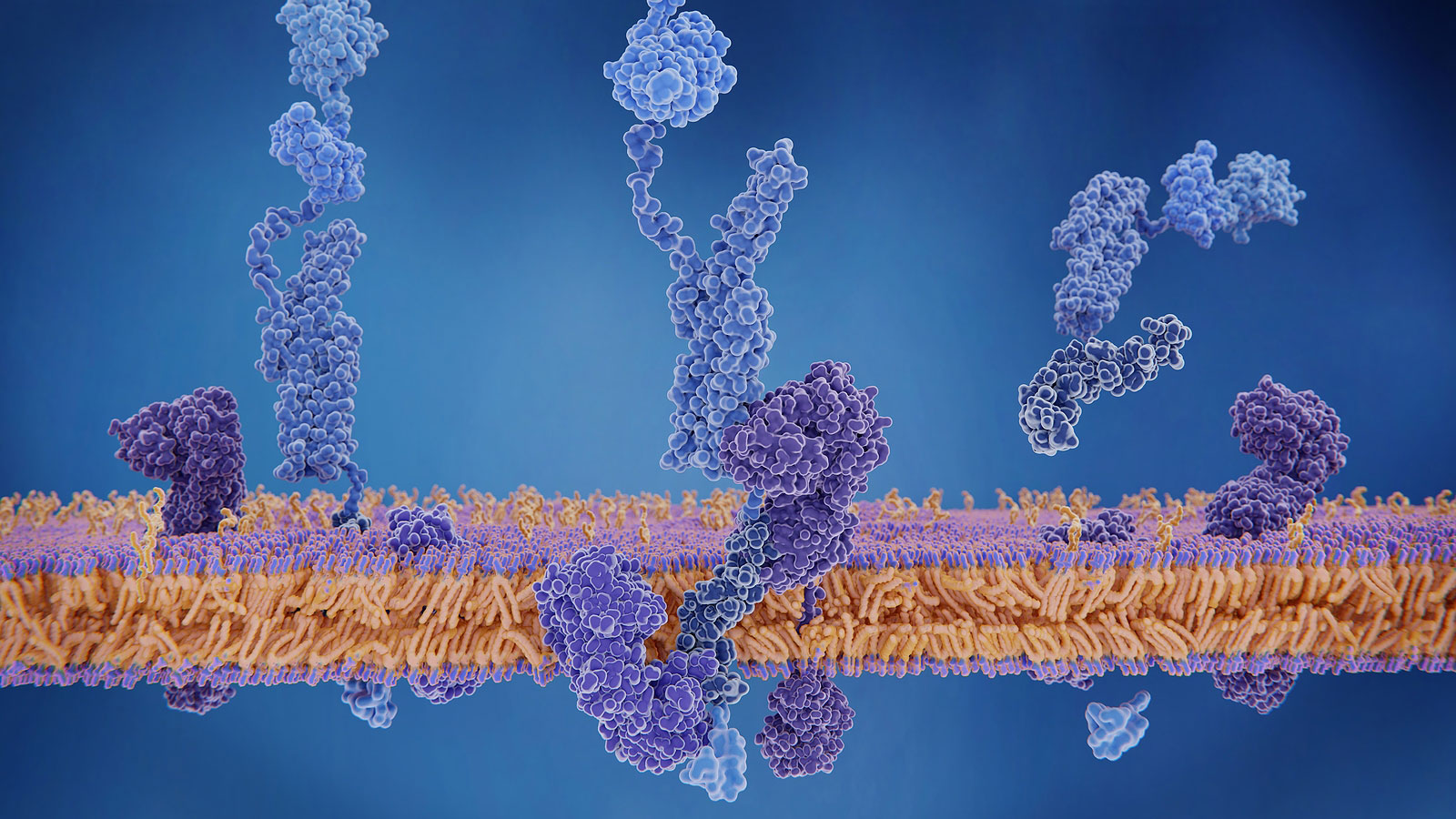 Beta-amyloid peptid. The amyloid precursor protein being cleaved by gamma and beta secretases and releasing the amyloid beta peptide, which can accumulate to amyloid plaques, one of the main symptoms of Alzheimer's disease.

All in on amyloid

Why did everyone focus for so long on lessening beta amyloid buildup for AD therapy? For one thing, the accumulation of beta amyloid in the brains of patients has been one of the few known disease hallmarks. Also, researchers found that rare mutations in any one of three genes involved with beta amyloid production or accumulation leads to early-onset AD in nearly everyone who has them. It seemed to make sense, therefore, that reducing or removing amyloid would mitigate AD progression.

Except it doesn’t. Failed clinical trials now number in the hundreds, including the one chronicled in the NYT article.

The anticipation that study generated was largely due to how its volunteers were selected. In the past, clinical trial participants were chosen because of existing symptoms of cognitive decline. But what if the damage had already been done, and decreasing beta amyloid at that stage of disease progression was too late?

The latest study recruited volunteers with a rare genetic mutation that meant they would develop dementia, but when the trial began, they were all still symptom-free. It was conducted over five years and involved monthly infusions or injections of one of two experimental drugs for each participant. The result? The drugs did nothing to stop or even slow down the rate of cognitive decline in the subjects. The findings raise the possibility that blocking beta amyloid is simply not a viable target for therapy. Or treatment may need to occur extremely early in disease development—years or even decades before any symptoms appear—to be effective. That is a problem, as there is no biomarker or other indicator currently available to predict future cases of late-onset AD, by far the most common type.

Researchers now think that beta amyloid buildup is only one part of a much larger collection of processes that lead to AD progression. Other factors, such as tau protein tangles (another hallmark of the disease), immune function, perhaps even vascular health, are all thought to contribute. Therefore, the presence of beta amyloid plaques alone is not sufficient to cause disease, and after a certain stage, their elimination is probably not sufficient to slow its course.

Therefore, instead of focusing on rare cases of early-onset disease caused by specific genetic mutations, scientists are taking a look at the bigger picture. Many, many factors likely come into play over the decades that eventually lead to neuron death and cognitive decline in late onset AD. Embracing all the variables involved, including environment and behavior in addition to genetics and physiology, is extremely difficult. But new research capabilities are making it possible.

Of course, using human patient data is only one part of the equation. A lot of insight can be gained by looking at patient cohorts, but it’s not possible to tease out the molecular processes that may take decades to change and become dysfunctional. Therefore, effective experimental platforms are vital for investigating the genetic variants that affect AD risk, the environmental and behavioral factors such as diet and exercise that play a role over time, and the interplay between beta amyloid, tau, the immune system, brain vasculature and other potential contributors to disease.

At JAX, the research program is exploring multiple aspects of AD. The MODEL-AD Center, led at JAX by Greg Carter and Gareth Howell, is using patient population data to identify genetic variants associated with Alzheimer’s disease. Recent work revealed two distinct subtypes within the patient data, one associated with chronic inflammation, the other not. The inflammation signature is strong when looking at patient cohorts that haven’t been stratified, so characterizing and identifying the patients with the non-inflammatory disease subtype has important implications for both ongoing research and clinical care.

Another important current MODEL-AD effort is to improve mouse models of the disease to better reflect patient biology and disease pathology. The most promising genetic variants identified in patients are being engineered into the mice using CRISPR, the most advanced genetic engineering tool available. Furthermore, mice that exhibit AD-like traits can be imaged using new techniques to visualize disease progression. They are also analyzed at the molecular level to validate their relevance to human disease. Ongoing projects include seeing how multiple variants combine to affect disease onset and progression, as well as assessing the impact of diet and exercise.

In a related effort, JAX’s Catherine Kaczorowski is using genetically diverse mouse populations to study susceptibility in different genetic backgrounds. Using a gene mutation that causes early onset AD, she has found that not all mice in a genetically diverse panel develop the expected neurodegeneration. She is now identifying the genetic differences that protect these mice from cognitive decline. What if we could bolster our natural protective mechanisms to keep robust neural function even if we’d normally develop AD? It’s an intriguing thought, and the early results are promising. Also, researchers have shown that early-life enhancements are correlated with lower subsequent AD risks, providing further insight into possible behavioral and, if the molecular mechanisms can be found, therapeutic strategies to decrease AD susceptibility long before disease onset.

So is the Alzheimer’s disease research cupboard bare? Far from it. Moving beyond beta amyloid, researchers are identifying the cascade of events that cause disease and impair brain function. They are also revealing new protective mechanisms and strategies. And with that knowledge, the potential to prevent or treat this devastating disease is growing all the time.