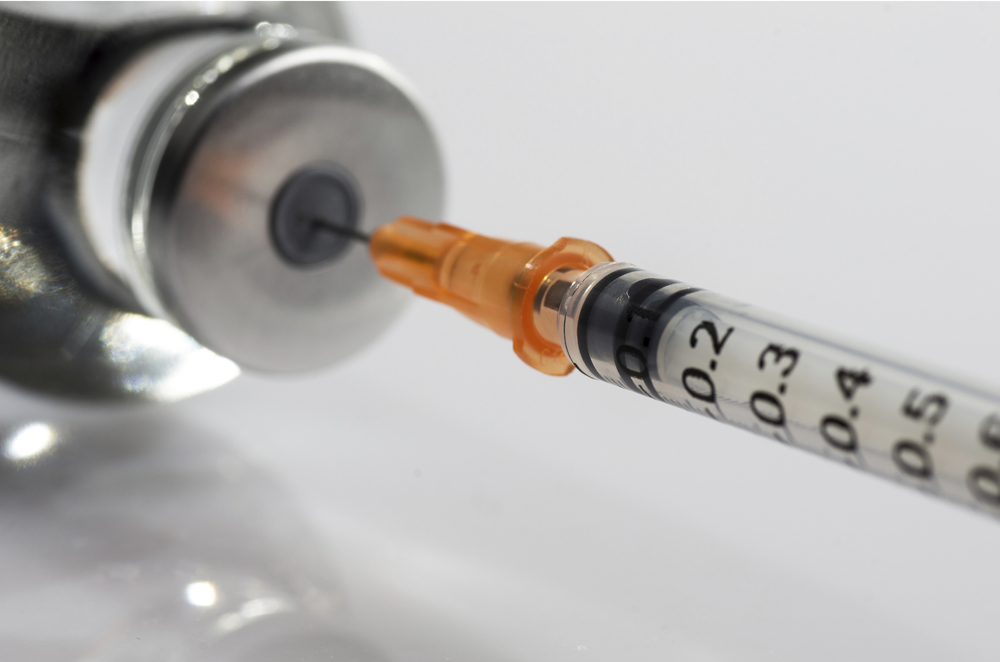 JAX has been distributing mouse models for type II diabetes (Non-insulin Dependent Diabetes; NIDD; T2D) since the 1960s, and today there are several models to choose from.  Unfortunately, no single diabetic mouse model recapitulates all of the features or complications of human diabetes.  How, then, do you choose which model (or models) to use in your research?  Indeed, one of the most common diabetes-related questions we receive in Technical Information is “Which diabetes model is ‘The Best’?”  Below is a broad overview of diabetes models that are available from JAX and some considerations to help you to make your decision.

Diabetes Phase I, II or III?

First some orientation:  Diabetes in humans typically develops through a progressive series of increasingly severe stages (or phases):

• Phase I: Postprandial as well as basal hyperglycemia; insulin-producing beta cells in the pancreas are increasingly dysfunctional.

Choosing an appropriate diabetes model depends on the severity of diabetes you wish to study.  As in humans, mouse models of T2D are obese, but vary in severity – some models are morbidly obese, whereas others manifest more moderate obesity.

Obesity is one of the greatest risk factors linked to diabetes in humans, and similar to humans, some mouse strains become obese when fed high-fat or so-called “Western” diets.  Among mouse strains, C57BL/6 is among the most sensitive to this diet-induced obesity (DIO).  C57BL/6-DIO mice, particularly males, develop severe obesity (of course!), increased glucose intolerance, moderate insulin resistance and elevated glucose levels, but they typically do not develop basal hyperglycemia.  Therefore, they are an appropriate model for studying pre-diabetes and diabetes-related metabolic syndrome, rather than overt, phase I or II diabetes.  Other inbred strains, such as male NON/ShiLtJ (002423) mice, do develop frank hyperglycemia when fed a higher fat diet, but their elevated glucose levels typically remit by 4-5 months of age.  NON-DIO mice also show higher triglyercides, free fatty acid and insulin levels compared with C57BL/6-DIO mice (The Jackson Laboratory, unpublished results).

Mice homozygous for the obese (Lepob) and the diabetes (Leprdb) mutations were the earliest diabetic mouse models characterized, and remain a popular choice for diabetes researchers. Leptin is a hormone that regulates appetite, and mutations in either the leptin gene (Lep) or its receptor (Lepr) induce unregulated feeding (hyperphagia), resulting in subsequent obesity and frank diabetes.  The severity of the diabetes in Lepob and Leprdb (ob/ob and db/db, respectively) is strongly influenced by the strain’s genetic background.  In the C57BLKS/J genetic background, both ob/ob and db/db mice manifest morbid obesity, chronic hyperglycemia, and pancreatic beta cell atrophy.  In contrast, on the C57BL/6J genetic background ob/ob and db/db mutants manifest only transient hyperglycemia, and the beta cells show hypertrophy, not atrophy. Due to this beta cell hypertrophy, B6-ob/ob and     mice are hyperinsulinemic, whereas BKS-db/db mice become hypoinsulinemic.  Both ob/ob and db/db mice model phase I and phase II diabetes, but only on the C57BLKS/J background, do they progress to phase III.

KK-Ay (002468) is another diabetes model whose obesity is driven by hyperphagia.  The mice, however, do not become as morbidly obese as ob/ob and db/db mice.  Like the latter, however, these mice model phase I, II and III diabetes.  KK-Ay  mice develop impaired glucose tolerance and insulin resistance, and fasting hyperglycemia.  Beta cells in KK-Ay mice, like those in B6-ob/ob mice, are initially hypertrophic, and the mice show early hyperglycemia.  Eventually, however, KK-Ay beta cells become degranulated, and the mice develop late onset hypoinsulinemia.

How About a Polygenic Model?

We often describe ob/ob, db/db, and Ay mice as “monogenic” models because their obese and diabetic phenotypes derive from single gene mutations.  Diabetes and obesity in humans, however, is a polygenic affair, since very few diabetes patients carry mutations in their LEP, LEPR, or A genes.  Two diabetic strains whose diabetes and obesity develop from combinations of diabetes-susceptibility alleles are now available, and are becoming more widely used:  NONcNZO10/LtJ (004456) and TALLYHO/JngJ (005314).

NONcNZO10/LtJ mice are a recombinant congenic line that was bred by JAX Professor Dr. Ed Leiter to specifically combine six diabetes susceptibility alleles derived from the obesity and diabetes-prone strain NZO/LtJ with two from diabetes-resistant and normally non-obese NON/ShiLtJ. (These are the same NON mice that are sensitive to DIO).  Although only 50% of NZO males become diabetic by 6 months, nearly all (90-100%) of NONcNZO10 males become hyperglycemic by this age.  NONcNZO10 males also show:

Both diabetes and obesity in NONcNZO10 are  sensitive to dietary fat and housing conditions.

TALLYHO/JngJ mice are another emerging, polygenic model for obesity and diabetes bred at JAX, in this case by Dr. Jürgen Naggert.  TALLYHO mice were inbred from two Theiler’s Original outbred mice that showed polyuria and glucosuria, selecting for mice at each generation that demonstrated hyperglycemia.   Unlike NONcNZO10 mice, both male and female TALLYHO mice become moderately obese, but only males develop hyperglycemia. Like NONcNZO10 males, TALLYHO males show:

Because of their polygenic nature, more moderate obesity and mature onset hyperglycemia, both NONcNZO10 and TALLYHO mice are believed by some to more accurately model the “garden variety” human T2D than ob/ob, db/db and Ay mutant animals.

What About Diabetes Complications?

Often diabetes researchers are interested in mouse models with more than just hyperglycemia.  Diabetic patients often suffer from additional afflictions that develop subsequent to and as a result of their uncontrolled blood glucose.  These include nephropathy, neuropathy, fat accumulation in the liver (steatosis), impaired wound healing and retinopathy.  All of the above models develop some degree of one or more of these diabetic complications, but no single model develops all of them.  None of them, for example, develop severe diabetic retinopathy.  In some cases, adding additional mutations to the mix can exacerbate one of these diabetic complications. BKS-db/db mice, for example typically do not develop nephropathy.  BKS-db/db mice that carry a targeted mutation in nitric oxide synthase 3,  eNOS (BKS.Cg-Leprdb Nos3tm1Unc/RhrsJ (008340)) develop robust nephropathy.

A chart that compares the diabetic phenotypes of the mice described above, and their susceptibility to diabetic complications is shown below. 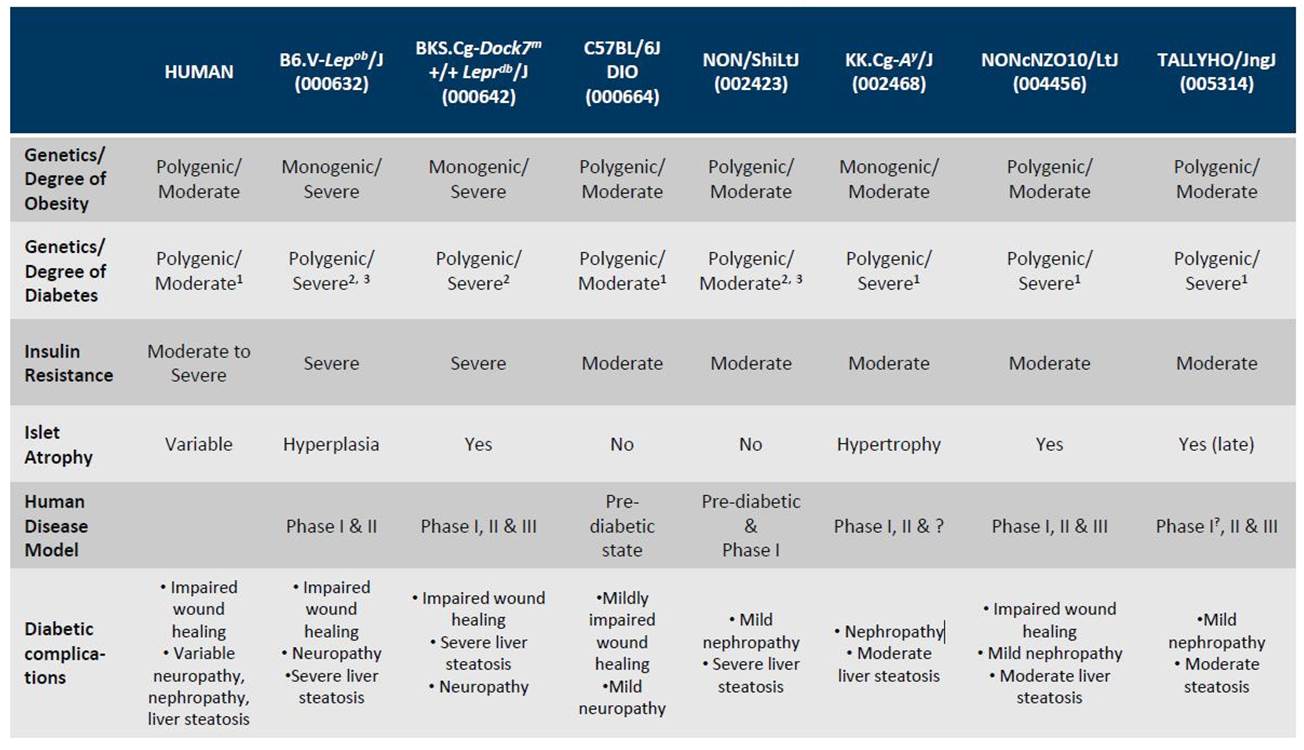 Choosing the most appropriate strain for your diabetes research can be challenging, and there isn’t necessarily a quick and dirty answer to which one is “The Best”  As with choosing any mouse model,  consulting the literature that characterizes each strain should  help make your decision easier. As for all of our strains (diabetic mice included), links to published references can be found under the “References” tab on each strain’s datasheet.